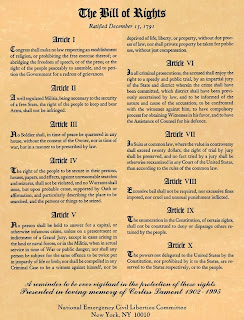 On December 15th, 1791 the Bill of Rights was ratified.
Benjamin Franklin had already warned ominously that we had a republic, if you can keep it.
Where the US Constitution articulated what the Federal Government may do, the Bill of Rights articulated Natural Rights of We the People that Government was forbidden to violate.
In 1791 the Federal Government had not yet begun to violate the Natural Rights of Americans.
There were no permits required to hold a rally or speech.  There were no infringements on the Second Amendment.  Troops were not violating the Third Amendment as they recently did in Nevada.  The Fourth Amendment was honored by every American.  The Fifth Amendment ensuring due process was respected by a Judiciary that had not, yet, been utterly corrupted (though within a decade Thomas Jefferson warned his Countrymen that the Federalists were retiring to the Judiciary as a stronghold, and in 1803 the Federalists succeeded in corrupting the relationship between the Branches of Government, the intent of the Framers, when they claimed the right of Judicial Review).  The Sixth Amendment had not been gutted,  The Sixth Amendment had not been destroyed with the Patriot Act and NDAA.  The Seventh Amendment is ignored every day across the country as defendants of even a traffic ticket are denied their Right to a jury trial.  The Eighth Amendment was obliterated by PATRIOT Act and NDAA.  The Ninth Amendment & Tenth Amendment have been outright ignored by FedGov.
In 1791, and for a few years afterward, our Countrymen lived under the DoI/USC/BoR paradigm as it was intended.  But the Federalists went to work very fast to transform .Gov into a beast.  Alien & Sedition Acts, Marbury, et cetera.
Our goal is to find our way back to 1791, and avoid making the same mistakes twice.
﻿